The trainee group does as, as many of you are familiar with, study visits the companies and GKN sites relevant to the aerospace industry and on Monday we had the privilege of visiting Landvetter airport. An airport is in many ways the heart of the aviation industry, aircraft of all kinds land and take off and every day thousands of people are flowing through the airports of the world on their way to the next goal. If we learned anything from this visit, it was that an airport is much more than meets the eye when you’re traveling!

The airport was built in 1077 and celebrates its 40th birthday later this year. At the airport there are three different parties responsible for different things:
Swedavia manages the airport, they are responsible for the premises as well as all logistics that are included in allowing the passengers to flow through the airport smoothly, from the point of arrival to the airport to the point of being on the plane ready for takeoff. Airlines (such as SAS, Ryan air, etc.) negotiate with Swedavia to use the airport. They own and are responsible for the aircrafts. The airlines, in its turn, hire a handling companies of their choice that are responsible for many of the services the airlines sell, for example all boarding related tasks. It means that the persons standing behind the boarding desk when you board an airplane are not airport personnel but employees hired by the airline you travel with.

During our visit we got to see a lot of the things you never see when you pass the airport as a tourist. Amongst other things we got a sneak peek into the black box that constitutes the handling of the baggage.

What really happens between the times when you leave your luggage on the carousel until it arrives at your destination? The baggage is transported into a room full of carousels at different levels from floor to ceiling and is handled via an advanced system of x-ray machines in different steps along the way to be loaded onto the right aircraft. The bags that go through the x-ray without trouble go one way, whilst the bags that do cause the x-ray machine to react (about 37%) go another way. A hatchway is then opened that forces the bags onto a belt leading into more advanced x-ray machines. Common things that can cause a reaction are detergents, hammers and gingerbread dough. After this the bags are transported onto one of many belts depending on the baggage tag and are then loaded onto different carts and then loaded onto an aircraft. Checked-in animals are picked up manually on the way to the plane.

One thing that they work extensively with at Landvetter airport is the airport’s impact on the environment. Their goal is to have no emissions of fossil fuels by the year of 2020. The airport has its own fire department and fire training site. To protect the environment from dangerous substances, such as PFOS, found to be in fire extinguisher they have created a closed system around the fire training area. All waste is collected and transported to closed wells where it is picked up and taken care of. Landvetter is among the best in the world with regards to take care of PFOS.

The reality is that, on an airport, sometimes bird strikes occur when the aircraft lands or takes off. Of course, they want to avoid bird strikes as it is a very unfortunate experience for both birds and pilots. Unfortunately, the bird strikes at Landvetter airport have increased markedly in recent years, as dams have been built nearby that attract birds. In only a couple of years, the number increased from 15 to 120 bird strikes per year. In order to overcome this problem, they have come up with a lot of creative ideas at the airport. Everything from planting sharper, more unpleasant grass around the airport so that the birds will not like it as much to trying to get rid of the insects so that the birds will have less to eat around the airport has been pondered upon. Lacking a permanent solution, they currently have two teams that alternate in walking around the runway trying to scare the birds off.

We also had the honor of meeting the airport manager Jörgen Bergstrand, who has also worked at GKN in Trollhättan for 17 years! Riding an airport shuttle bus on the 3.3 km long runway was a new, exciting and unexpected experience, thanks to the very engaged bus driver (seen in the rear view mirror in the picture)! 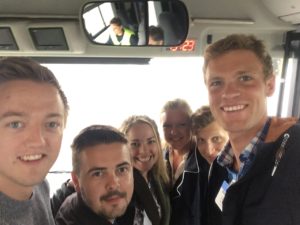 Landvetter is a growing airport and it is fun to see. They have many years’ worth of projects already started. The projects will bring new terminals, more carousels, an increased capacity, a new hotel and an area with a shopping center and offices for companies to rent.