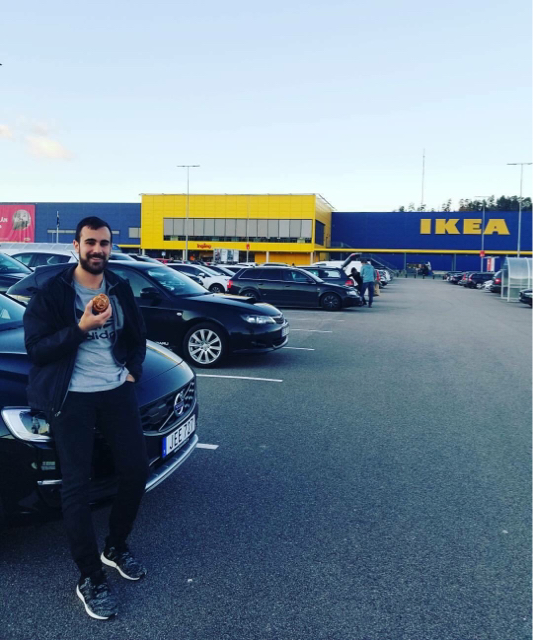 Me, my Volvo, and my kanelbulle

Six months ago I landed in Sweden with no idea what to expect from life and work here. I didn’t know who I’d be working with, what I’d be working on, or what life would be like in Trollhättan. This past six months have been filled with all sorts of amazing experiences, but now it’s my time to go back home. All good things must come to an end, and that’s true for both my time in Sweden and for my time as a GKN trainee.

Learning about Swedish culture, at work and otherwise, has been an absolute joy. One of the advantages I’ve found by being in Sweden during the winter it’s, despite the bad weather, given me insight into parts of Swedish culture that would lost on those who visit during the warmer months. This includes the julmarknad, Christmas market, where one can buy gifts for the family as well a variety of food and drinks, such as; glögg (mulled wine), sill (pickled herring, a classic), reindeer, älgkorv (moose sausages) and other tasty treats. These foods might end up on the julbord, Christmas table, the traditional spread of foods families feast on during Christmas. We were lucky enough to join with our trainee friends, current and former, to try a julbord at their St. Lucia celebration, a two-for-one Swedish tradition learning opportunity. Another small detail of Christmas time were the lights almost everyone placed in their windows, giving every town in Sweden from Malmö to Kiruna a cozy Christmastime feel.

At work, I found many cultural differences. The first, of course, was fika! Fika is the wonderful Swedish tradition of a work group coffee break with cake and/or pastries. Time on Friday afternoons comes to a stop when everyone assembles for our weekly “Fredagsfika”. This is in contrast to the American tradition of Friday donuts or bagels, where no one is taking time off, nearly the amount of time it takes to eat a donut. Sometimes an enterprising coworker, or their spouse, will make their own cake or pastry for fika. I myself made brownies and snickerdoodles to add an American dimension to a Swedish tradition. All in all, my favorite fika treat has to be the kanelbulle, the Swedish cinnamon bun. Another cultural aspect is idea of the afterwork. I had never spent time with my coworkers outside of work, so the concept of grabbing dinner or going bowling with my fellow trainees was a foreign concept to me. This is one tradition I’m hoping to bring back to the US. I really like the idea of getting to bond with coworkers in a non-work setting, I think it promotes good teamwork. The last cultural difference isn’t so much a tradition, but more of activity. With a gymnasium on site, coworkers will gather three days a week to play innebandy (floor hockey). I joined nearly every time I could, and will tell you that despite being a technically non-competitive game, things get intense! I’m almost 100% positive this type of thing would never happen in the US, with coworkers getting injuries like twisted ankles relatively often, or using body defense against your boss.

Before this post gets too long, I want to summarize the places I’ve been to and the things I’ve seen. Over the past 6 months I’ve been to Gothenburg a fair share of times, Stockholm three times, Kiruna in Northern Sweden twice, Copenhagen, Oslo, and a whole slew of countries and cities on our Eurotrip. I’ve visited the SSC, OHB, GKN Fokker Aerostructures, ESA, GKN driveline in Paris and Safran on study visits. My sister and later some of my friends from home came to Sweden and allowed me to show them this amazing country. In short, it’s been an action packed and eventful six months. Six months I’ll remember for the rest of life.

Lastly, a small list of things that annoyed me about Sweden, because no where’s perfect. Number one, the prices. Good lord, living in Sweden is expensive. How does everyone dress so nicely and feed themselves at the same time? Is 80% of your income spent on food and clothes? Number two, speaking of dressing nicely, Swedes are too good looking. No one wants to feel unattractive for 6 months straight. Sometimes I seriously feel like the worst dressed person in this whole country. Lastly, topics of discussion. Yes, there are in fact things to talk about besides the weather and the “new” coffee machines they put in two months ago.

All that’s behind me now, for in a few short days I make my return to San Diego. Soon I’ll step off the plane into the warm Californian sun, and step forward into the next chapter of my career here at GKN.