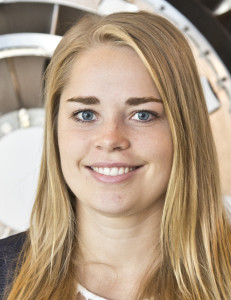 Mechanical Engineer with Master of Science in Production Engineering, Chalmers University of Technology

I was born in 1992 in Gothenburg where I lived during the first 18 years of my life together with my parents and sister. I tried a lot of different sports as a kid, but nothing that really caught my interest. I had a brief carrier within figure skating that ended when I realised I would not become good enough to compete in the World Championship. However, I always enjoyed solving problems which has been the foundation for my choices regarding education.

I chose to study natural sciences in high school and the choice was quite easy as I didn’t know what I wanted to work with in the future and was interested in various areas. After the three years in high school I still hadn’t found what was the most interesting area which is why I chose to study Mechanical Engineering at Chalmers, which is a broad. Having finished my Bachelor after three years at Chalmers I realised that neither automatic control, fluid mechanics, mechanics nor calculus were my thing. Instead I had discovered how interesting production can be which is the reason for my decision to apply for a master within this area. The last two years of Chalmers were so much fun and educational and I realised that production and production development definitely was my cup of tea.

To give myself some breaks in the studying during my time at Chalmers I travelled. I got to visit quite many places despite the low income from student loans and summer job salaries. I enjoy discovering new places and look forward to keep on doing that while being a trainee at GKN. Apart from travelling I also enjoy working out, mostly intense gym classes, but also running. I have run Göteborgsvarvet (21km) twice and have, after each race, gotten the feeling that I never again want to run. This usually changes after a while and maybe I will run for a third time.

I have, unlike my fellow trainees, neither worked nor done my master’s thesis at GKN before and I have therefore a lot to learn about the company. The months of being a trainee is, in my opinion, a great way of getting to know the company and develop personally as well as professionally – and having tons of fun while doing so!