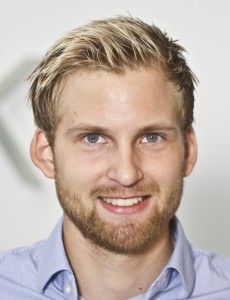 On the picture you finally see the face of this blog’s first young graduate born in Värmland (an area in mid-Sweden). The year of 1988 I was born in the Swedish town Karlstad, nationally known as “the city of the sun”. How true this statement is can be argued forever so I will skip this for now. After twelve mandatory years in school I felt the need to take a break from studying and do something else. After a couple shorter project based employments I got a permanent one at Karlstad Post Terminal where I stayed for almost two years. Now the motivation to study was back and the choice fell on five years with rain and Mechanical Engineering studies at Chalmers University of Technology in Gothenburg.

When completed the Bachelor I felt the right choice for me was to pursue with a Master within the field of Applied Mechanics, specializing in Computational Solid Mechanics. After one and a half year with many hours spent in the computer rooms, the time at Chalmers was leading to an end. Since one of my favorite subjects during the master was Fatigue and Fracture I wanted to write my master thesis within this field. After a review of possible thesis works my partner and I found the most exiting alternative on a company, a bit up north in Trollhättan, named GKN. The thesis was about evaluating possible further development of the Life tracking system (LTS) used for the RM12 engine in the Gripen fighter airplane. At this point, my knowledge of the company was based on a few shorter presentations at Chalmers. What I learned during my weeks at the company was what a huge technical knowledge, exciting products and great opportunities there was for me. Because of this I deiced to apply for the Young Graduate program. After two days with various assessments and some additional nervously waiting I got the happy announcement that I was accepted to the program.

During my spare time I have always tried to stay active. My main sport has been bandy (if you never heard of it, Google, and look for the sport played on ice) but due to lack of time I decided to put my career on hold. Instead I replaced my goalkeeper gloves with golf clubs, climbing shoes and time at the gym. Besides exercising I like to travel and spend time outdoors. Especially in the northern parts of Sweden where hiking, fishing or skiing are popular activities depending on the season.