The work done over here is going towards its end. Before I leave I will present my work together with a few written reports that will be useful for the person continuing the work after me. A methodology how to evaluate a ceramic structure using FEM will be covered together with a material test plan. Beside standard analytical work I have put in a lot of hours into research regarding behavior of ceramic materials.

For about a week ago I got the chance to celebrate my first 4th of July. The only time a seen people being this nationalistic before is when I been watching the Sweden national team of Soccer play in the European or World cup. The day started off with a short glimpse of the parade that is held in Huntington each year. Some pretty impressive arrangements could be seen, but I couldn’t stay too long since me and one of the other Swedes was arranging a Swedish midsummer lunch. 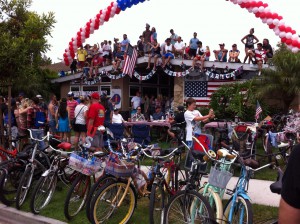 Previous week the 737 Max programme reached an important milestone with the first delivery of Ti-honeycomb inner wall and of course this was celebrated with cake!

I would also like to mention an initiative from the Driveline division a couple weeks ago. Every year there is a student event at Silverstone England called Formula student. For you that are now to this it is a competition were student teams from 25 countries compete against each other with Formula cars that they built themselves. During the days at Silverstone the car is tested and evaluated through different challenges and the team with the highest total score wins.

GKN has been sponsoring this event for several years with people on site to represent the company in different ways. As an extra “THING” this year four engineers will drive cars that GKN have participed in making from Lohmar to Silverstone. The trips will be documented on GKN social media like Twitter and Linkedin. In addition to this GKN also has a temporary webpage up and running exclusively for this competition.

So check out the following social media for more information and see what’s been going on.